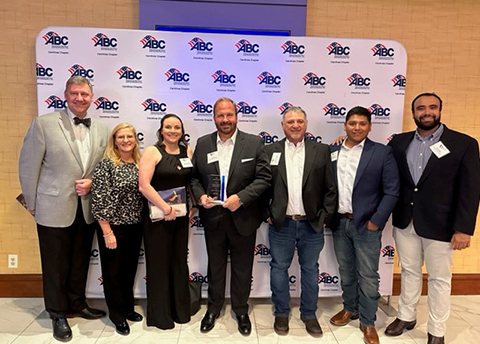 The EIC award annually recognizes and celebrates outstanding projects by ABC Carolinas members and is the premier competition within the Carolinas construction community. Projects are selected for unique characteristics and quality with awards given in any category for an Honorable Mention, an Award of Merit, or a first-place Eagle Award.  At this year’s event, held at the Hilton Charlotte Uptown, Evans was presented with an Award of Merit for GARCO Mill for Ingevity and an Honorable Mention for Sunny Slope.

GARCO Mill for Ingevity placed in the commercial category for projects ranging from $10M – $25M. It was delivered as a Phase II design-bid-build project that included the core and shell build-out of a 108K sf, 4-story building with tenant improvements for Ingevity which occupied the second through fourth floors as their new headquarters. Unique challenges Evans overcame for this build was the asbestos laden site, which resulted from the early 20th century textile factory that was once home to General Asbestos and Rubber Company, better known by its acronym, GARCO. Special precautions had to be taken to remediate the site including certifications to work with asbestos, wearing Tyvek suits and half face respirators while performing work, and a vapor mitigation system installed.

Project Sunny Slope earned an Honorable Mention in the industrial category for projects ranging from $25M – $50M. The facility took 15 months to complete and featured a 1,401,200 SF building with guardhouse and a 250K gallon fire water storage tank. Built with future expansion in mind, the team strategically planned for additions to both the warehouse and office spaces, as well as infrastructure for future conveyors, pick towers, and racking. Obstacles were faced such as supply chain shortages with switch gears, roofing, and concrete, but through coordination with all of the trades, Evans was able to place focus on critical path areas to keep the schedule flowing.

“Both buildings were standout projects for our regional offices,” said RT Evans, President & CEO. “Each had obstacles that the team’s faced head on, delivering true excellence in construction for our clients. These honors continue to solidify our commitment to quality and are shared with all our partners and tradespeople who had a hand in the project’s success.”