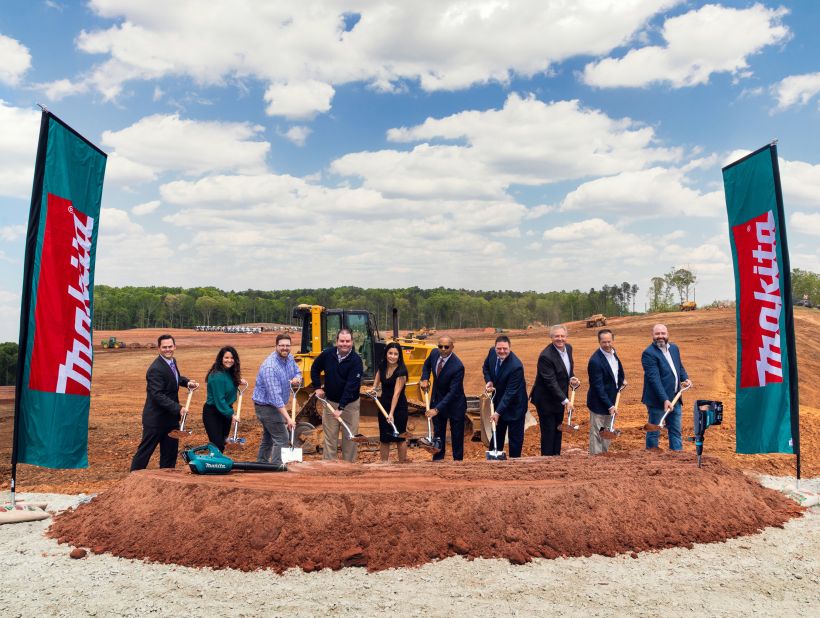 Continuing its national expansion strategy, Makita U.S.A. Inc. celebrated the commencement of construction of a new Atlanta-area distribution center with a ceremonial groundbreaking event on April 20. The industrial facility will take shape on a site spanning 80 acres in Hall County, Ga.

The groundbreaking comes roughly two months after Makita announced it had acquired the land for the project in a deal that closed in early February. Facing ongoing business growth across the country, the U.S. division of the Japan-based Makita Corp. power tool and equipment company will utilize the facility to accommodate increased operations, expanded service and training capabilities.

It’s a project that dovetails not just with Makita U.S.A.’s objectives, but with the general, global goals of the parent company as well. “We are planning initiatives for logistics hubs—building new facilities and expanding and enhancing existing facilities—in regions across the globe, as we increasingly handle more large-size products,” as noted in Makita Corp.’s 2020 annual report.

Upon completion of the Hall County project, the state-of-the-art property will offer space not only for distribution center uses, but also for a factory service center, a sales and training center and customer service resources. Furthermore, the site provides ample room for growth, with the capacity for additional development of as much as 800,000 square feet.

Makita is joining forces with tried-and-true partners on the Hall County undertaking. Scannell Properties, which has worked with Makita on such endeavors as the tool company’s expansion of a Scannell-built facility just outside Dallas in Wilmer, Texas, is developing the distribution center. Additionally, Evans General Contractors, which also worked on Makita’s Wilmer project, is serving as general contractor on the Hall County development.

Had Makita foregone pursuing its own development and opted to lease or buy an existing facility in the Greater Atlanta area, it would have faced quite a challenge in finding suitable space. Quite simply, industrial demand continues to outpace supply. Over the last 12 months, metropolitan Atlanta recorded positive net absorption totaling 28.4 million square feet, compared to 19.2 million square feet of new deliveries, according to a first quarter 2021 report by Newmark. Additionally, at just 6.6 percent, the vacancy rate is at its lowest level in more than 12 years and asking rents continue to climb.

“Atlanta remains a top industrial market in the U.S. due to its proximity to the Ports of Savannah and Brunswick, which continue to set records for container volume, the growing population in the Southeast and the cargo volume at Hartsfield International Airport,” according to the Newmark report. “While e-commerce sales volume is below the peak of mid-2020, it is still expected to drive demand for warehouse/distribution space in Atlanta for at least the next 12 months.”

Developers that are working feverishly to fill the void in Atlanta’s suburbs with spec product include Hines, which broke ground on Busch Logistics Park in Bartow County in January, with plans of delivering two buildings totaling roughly 732,000 square feet in the third quarter of this year. And Transwestern Development Co. expects to complete Cartersville Logistics Park, a four-building, approximately 953,200-square-foot industrial park in Cartersville, in the fourth quarter.