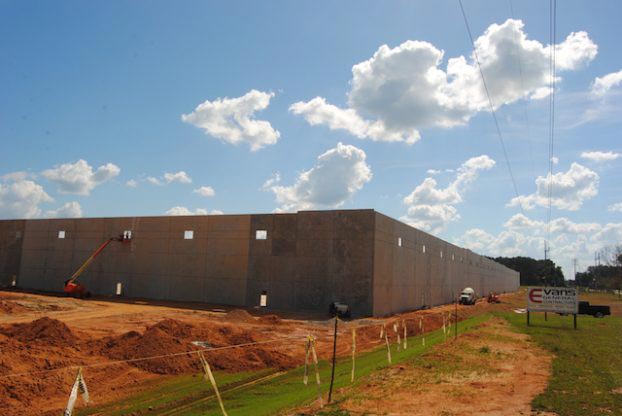 VALLEY, AL — The fair weather recently experienced in the local area has allowed work to proceed at a fast rate on the West Rock distribution center that’s going up in Valley Industrial Park. It’s going to be a massive building that will be a welcome addition to the industrial park.

The shell is complete on what will be a 375,000-square-foot building and work is now underway on the roof. The colors have been selected, and painting will begin in the near future. Asphalt for the parking lot will start going down today.

The construction work is being done by Evans General Contractors from the Atlanta area. Construction Superintendent Clay McCord said that he’s pleased with the pace of construction that’s been going on lately. “We had 72 people here this morning,” he said. “It’s been hot lately, but they are used to it. We’ve had a great work crew.”

McCord is a native of Alexandria, Ala. and currently lives in Pensacola, Fla. He has supervised construction projects all over the world, including such remote places as Afghanistan and Australia. He’s glad to be back close to home.

“I’d much rather have a four-hour drive than a 14-hour plane flight,” he said.

McCord said that he would be finished with his part of the job in December and that the building would be turned over to West Rock next February.

The distribution center is being built on a 30-acre site owned by Scannell Properties and will be leased to West Rock. The new building is going up along Valley Industrial Drive, which runs behind the former Lanier-Carter Mill site. A new road is being built off of Industrial Drive back toward the Interstate. It will be known as Four Star Drive and will provide access to the new Four Star Freightliner truck sales, maintenance and repair business that will be locating there in 2019.